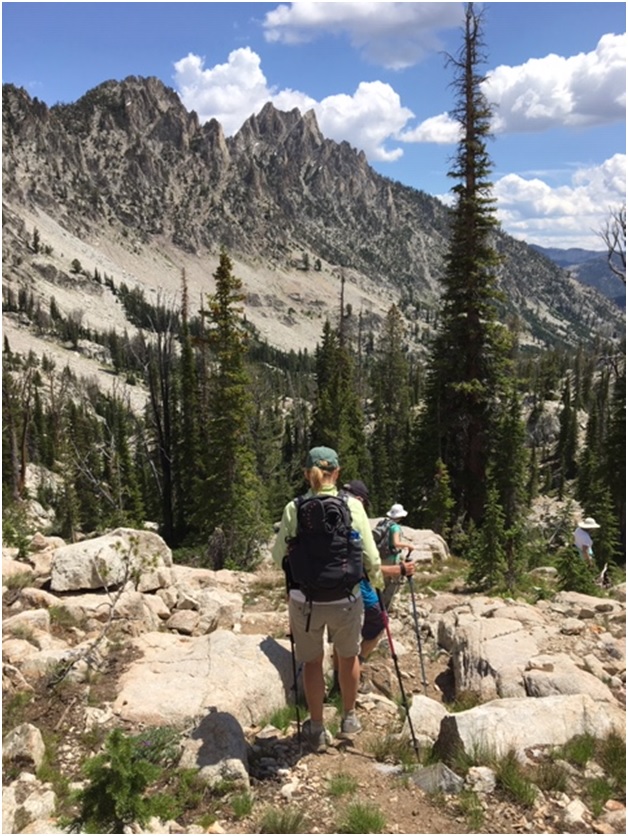 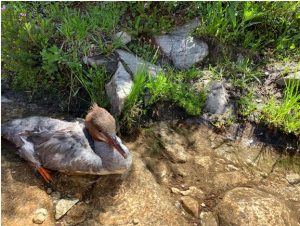 asking for help but receiving it when it’s offered, and interestingly enough it didn’t involve a person, it involved a duck.  Yes, a female Merganser duck that fishes in the high mountain rivers and lakes.

Hiking with friends, we came upon two young men sitting on the trail.  When they looked up and saw us, they pleaded for help.  My first thought was that one of them had injured their leg and that it was time for my first aid training to kick in.  As I got closer I realized that one of them was holding a wild duck in his hands!

We gathered from their story that they had found her sitting on the trail, that she had a fish hook stuck in her mouth and the line was wrapped around her beak.  Between the two of them they had been able to remove the fishing line, but couldn’t remove the hook that was stuck at the back of her throat.  While one young man held the duck and I held the beak open and moved her tongue out of the way, the other young man worked to remove the hook.  If you know wild animals at all, it’s rare for them to submit to something like this, they usually fight any help.  She was so weak and dehydrated that she was still and submitted to us working on her this way.  We successfully removed the hook and decided getting water in her was the next most important step.

My hiking buddy picked her up and started toward the lake at full speed, and I was hoofing it behind him, as I had an irrigation syringe in my first aid kit.  Our plan was to get her to the water, help her start drinking and release her.  We made it to a stream crossing, cooled her off in the water and we got really excited when she took the water I squirted into her beak.  We took off again to the lake and set her in the water.  She immediately started swimming away, drinking heavily and when we last saw her, she was floating happily.

At the lake we met with a ranger and trail crew who had been camped there and when we shared our story, they were so happy.  They had been watching her with binoculars for the last four days, knowing she was in trouble and there was nothing they could do to help her as she would not allow them to get close. They thought she was going to die.

How often have you or someone you know needed help and been loath to ask for it or accept it?  We aren’t as wild as that duck, yet we can be as afraid to admit we need help and to receive it when it’s offered, until we’re that desperate.  It takes courage to ask for help.  There is great vulnerability in the asking and the receiving, especially in any kind of leadership position.  Just like the duck, we can carry an innate fear of vulnerability and that we’ll be taken advantage of.  And yes, in some cultures and families, vulnerability is a risk and is not respected.  If you have a fear of asking for help, use your discernment and ask someone you trust, whether it’s a friend, family member or team member.  Don’t wait until your project is in the toilet, your relationship implodes or you’re in the emergency room.  Ask for help – it is a leadership skill.  And you could be as lucky as that duck we found on the trail.

Sabrina Roblin, CPCC has been a professional coach, mentor, and trainer since 2004.  She has worked successfully with individuals and for corporate clients that include Cargill, Medtronic and Stantec. Contact her for more information and a complimentary coaching session.

← Leadership Lessons from the Wilderness
Mongolian Lessons in Resourcefulness →